Our nation is in distress. When I began praying over the text for the sermon this week, I was too. I have been pulled over by police five times in my life. Only one of those times was I certain I was doing something seriously wrong. It was only that time that I was truly fearful. I won’t go into detail, but 19-year-old males often drive and act foolishly . Hopefully, they live to tell about it.

When I see a uniformed police officer in a public place or a patrol car on the highway, I feel immediately more secure. I have almost no cultural frame of reference for people who feel afraid or threatened by police presence, but I recognize that people aren’t lying when they say they worry about being unjustly targeted because of their ethnicity or appearance. We can debate on the reasons for this sense of injustice, but we should not dismiss the voices of those who speak from another cultural perspective. This isn’t some notion of privilege, intersectionality, or Marxist critical race theory. This is just listening to people made in the image of God.

I don’t think politics should be the main goal of any prayer or sermon in a church, but sometimes it is unavoidable. This is one of those times. This scripture in Hebrews and our present context makes it necessary.

I don’t think politics should be the main goal of any prayer or sermon in a church, but sometimes it is unavoidable. This is one of those times. 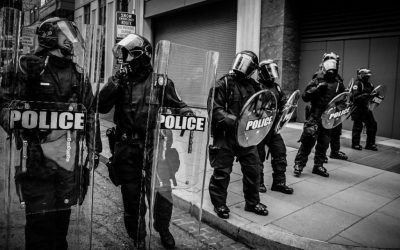 “For I tell you, unless your righteousness exceeds that of the scribes and the Pharisees, you will never enter the kingdom of heaven”  -Matthew 5:20

The writer of Hebrews makes clear in chapter 11 that it takes more than courage to meet unrighteousness with righteousness. It takes faith. It takes a strength of resolve that goes above mere human ability. Humanity saw that with Dr. King, the freedom riders, and other leaders of the American civil rights movement. Humanity saw that with William Wilberforce, John Newton, and Fredrick Douglass with the work to abolish slavery. It will take faith to overcome the national sins of “These Yet to be United States.”

We are not made righteous by our actions. That is half the message of Hebrews 11. Even people who think they are acting for justice can act very unjustly. Even the actions that may work for goodness in the world do no profit the unbeliever who is ultimately condemned for rejecting the Son of God. It is faith alone in Christ’s atoning life, death, and resurrection that makes us righteous before God because he is righteous as God.

But the second half of the message of Hebrews chapter 11 is that we are not made righteous apart from our actions also being made righteous. Christ does not save us to let us remain in sin or ignore the problems of unrighteousness in our world. That includes, first, doing less unrighteousness personally, and then working to make righteousness the law and practice of our communities. In a democratic society, we have the privilege and responsibility to call for laws that promote righteousness and oppose unrighteousness.

We see that in the story of Moses and the Exodus, there was the enslavement and oppression of people based on race and the selective killing of infants in the name of population control. If we cannot draw a straight line from there to our present context, then we are blind or blindfolded. Right now the two greatest sins in our nation are racism (racial or ethnic prejudice or hostility) and abortion (ending the life of a human being before birth). No one really disputes that these two things happen, but we do seem divided as a nation on whether they are problems that need to be solved by laws. Some dispute whether either or both of them are problems at all. Thankfully, not too many people are still openly championing racism, but too many deny that there remains a systemic problem of racial prejudice.

Both sins deny the fundamental truth that all humans, regardless of sex, age, and level of independence are equally created in the image of God and have should therefore have equal dignity and protection. We see the sins of infanticide and racial prejudice as evils to be judged as such in the history of Moses and the Exodus. We see the judgment of God against such unrighteousness will be severe and wide-reaching. He doesn’t just judge leaders of nations, but he will judge entire nations for the evil of denying the dignity of his image-bearers. He places foolish, prideful, corrupt, and wicked leaders over nations as a judgment against them. Our churches cannot be silent on these issues, because as God’s people here in this nation, we suffer or succeed along with our neighbors. If we do not have faithful works that testify to the righteousness of Christ, then we probably don’t have saving faith that he really is God the Son. It will take a mighty faith and people of faith to stand against the evils that plague our nation. If we leave it to unbelievers alone to speak for the changes that need to happen, then we sentence our nation and ourselves to judgement.