Much of the history of Campton has been lost. Our local courthouse, which housed many records, has burned… twice.

Much of our history has also been recovered and preserved through the work of many local volunteers and by the mercy of God.

Our church was sent an important part of our history in 2009. We received a package from Connie Hoskins of Beaver Dam, KY which contained what appears to be the original church record book of Swift Camp Church, which was founded even before the town that would one day be called Campton, Kentucky.

In the book, which was according the records therein, purchased by the church for $1.60, we find the original articles of confession of the church that would eventually become Campton Baptist Church. The leaders of that first church who signed the confession of faith are identified as the Elders William Boothe and John D. Spencer. Other founding leaders identified include C.M. Hanks and Elkanah Garrett, both serving as clerk. 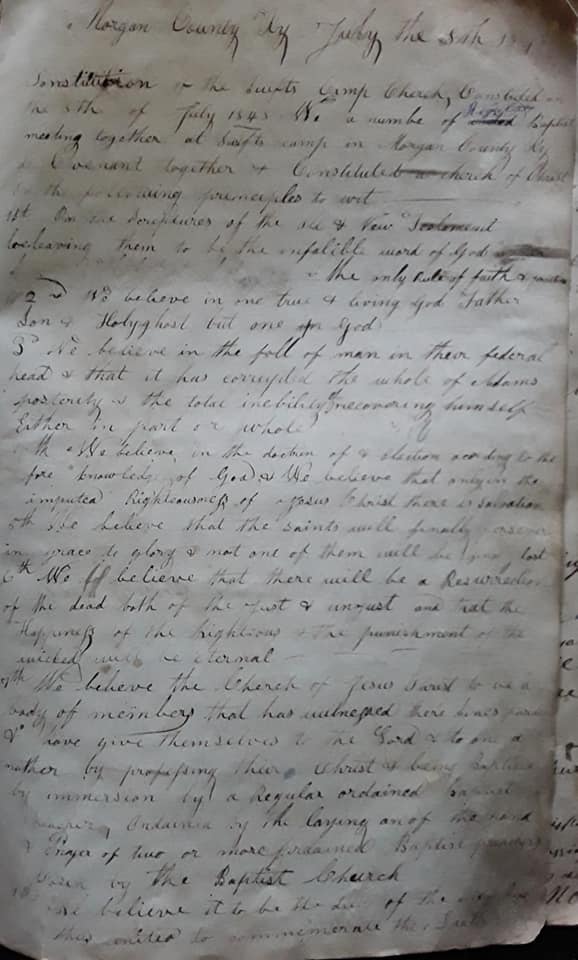 Today, we want to pray for the needs of our church and our community. These founding members of our church thought to organize and establish a church, even as they were just forming a town. This shows that they could not imagine a community in which there was not a church to proclaim the good news of Jesus and make disciples in his name.

As we prepare for our worship together on Sunday, I encourage us to reflect on these scriptures that emphasize the characteristics of leaders in the church. Remember that we are seeking the help of a church member to lead us by example in these qualities that are all commended and many commanded to be the fruit of the Spirit in all men and women who would follow the Lord Jesus.

Our First Confessions of Faith

The following are a lightly edited (for clarity) transcription of the original first 7 articles of faith for the Swifts Camp Church, from July 8th, 1848. These confirm the tradition of faith once and for all delivered unto the saints,  that we have received by grace and in which we hope to continue.

On the Scriptures of the Old & New Testaments, believing them to be the infallible word of God & the only rule of faith & practice.

We believe in one true & living God, Father, Son, & Holy Ghost, but one God.

We believe in the fall of man in their federal head & that it has corrupted the whole of Adams posterity & the total inability of recovering himself, Either in part or in whole.

We believe in the doctrine & Election according to the foreknowledge of God & we believe that only in the imputed Righteousness of Jesus Christ there is salvation.

We believe that the saints will finally persevere in grace to glory & not one of them will be finally lost.

We believe that there will be a Resurrection of the dead, both of the just & unjust and that the happiness of the Righteous & the punishment of the wicked will be eternal.

We believe the Church of Jesus Christ to be a body of members that has witnessed their sins pardoned & have give(n) themselves to the Lord & to one another by professing their Christ & being Baptized by immersion by a Regular ordained Baptist Preacher, ordained by the laying on of the hand & a Prayer of two or more ordained Baptist preachers Chosen by the Baptist Church.